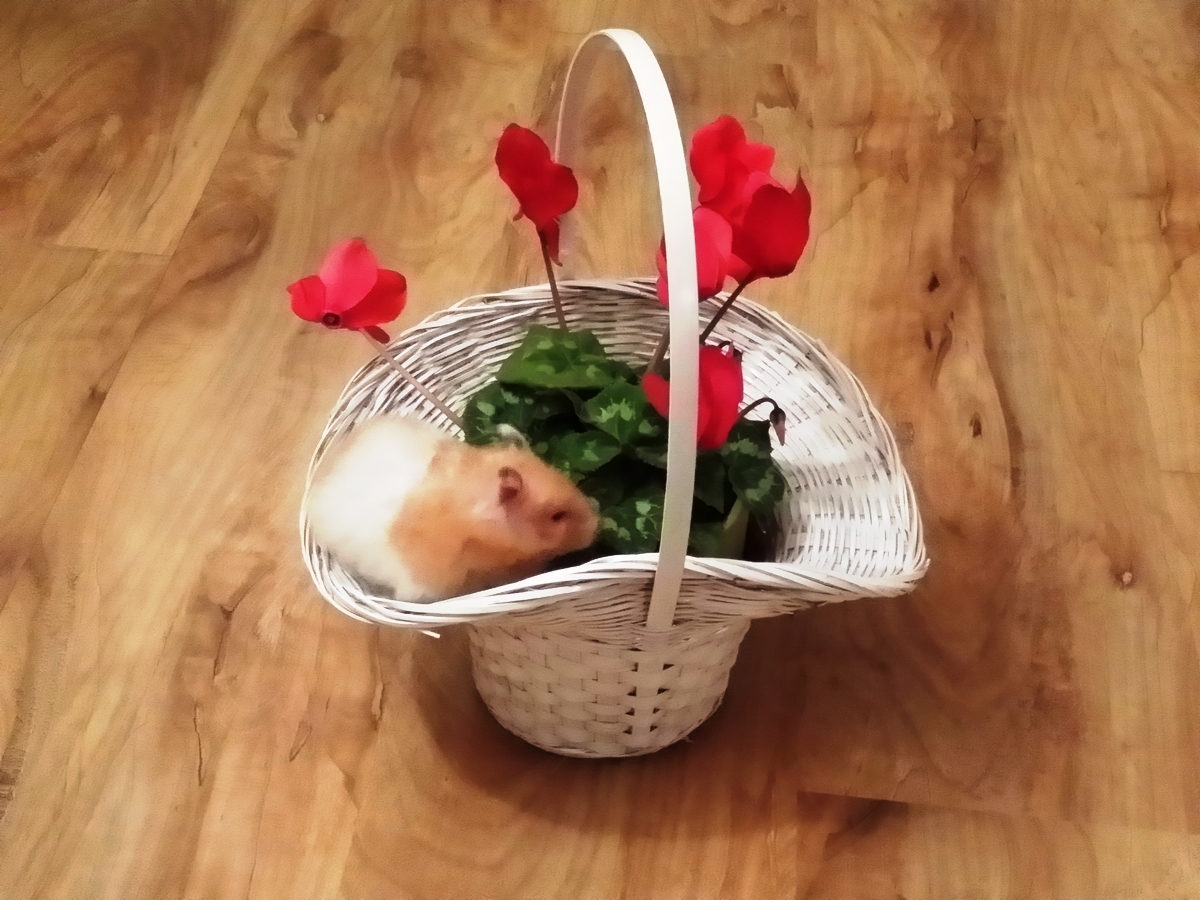 This week I would like to introduce another pet species we see as patients at Amherst Veterinary Hospital; I want to introduce you to Jericho, a hamster that first came to see us this summer.

There is a popular children’s book series called “The Adventures of Humphrey the Hamster,” which chronicles the adventures of a classroom hamster through the eyes of the hamster. I often think of this book when I see Jericho because this little hamster has lived a life that if she could talk, she would have stories to tell.

What we know of Jericho first began in June 2014. She was found lost or abandoned at Jericho beach here in Vancouver by a young couple visiting from Australia. Lucky for Jericho, this couple took her in as their pet. We first met Jericho when she was brought to Amherst in August and seen by Dr. Sofronia because she had purulent discharge draining from her right eye and had developed a swelling on the right side of her face.

It was determined that Jericho had an abscess on her cheek (an abscess is an enclosed collection of pus somewhere on the body). The owners were given instructions to return the next day for Jericho to be sedated so we could properly drain and clean the abscess and determine the source of the infection. Once Jericho was adequately sedated, Dr. Sofronia was able to have a good look in her tiny mouth. She found that the infection was coming from her cheek pouch and extended to the surrounding jaw area. Jericho also had an infected loose molar tooth, which may have seen the source of the infection. Dr. Sofronia took a sample of the purulent material for culture to confirm the right antibiotics were being given, cleaned the infected area and extracted the diseased tooth. Jericho was sent home with antibiotics, pain medication and eye drops.

Initially, Jericho got better, but shortly after the antibiotic was finished the abscess reformed and she needed to be treated again. This happened 3 times over the next two months. At one point we were seeing Jericho several times a week in an effort to keep her abscess drained.  Her owners were very dedicated; they diligently gave her the necessary medications at home and brought her in for the requested re-examinations. Finally, upon submitting a new sample of the discharge for culture, it was determined that Jericho may have been suffering an infection caused by anaerobic bacteria. These types of bacteria do not grow on routine cultures, so are difficult to indentify. She was started on a second antibiotic specific for these types of bacteria. We were all very optimistic that her abscess would resolve completely this time around.

Throughout all this Jericho was an exemplary patient and her owners very committed. As you can imagine it would be near impossible to hold, examine and treat a tiny 100 gram patient if they were squirmy and uncooperative. Jericho however would sit in our cupped hands and allow us to flush sterile saline to the wounds on her face and do whatever else was necessary. She took the medications from her owners and allowed drops to be put in her eye. She did not seem to mind the handling or the fussing.

With her abscess healing well, we saw Jericho again in October. This time is was because she had leaped off a table while playing and her left hind leg looked swollen. An x ray was taken and it was discovered that she had fractured her leg in at least 3 places. An honest, open discussion was had about Jericho’s pain level and quality of life. During this discussion with the owners, Jericho sat in her cage, ate her food and moved about seemingly happily. It was decided to send Jericho home with pain medication and see how she managed. If she showed any signs of unwillingness to walk, interact or eat, then it would be interpreted as her pain poorly controlled, her quality of life inadequate, and her owners would know it was her time. We communicated with the owners daily and amazingly Jericho showed none of these signs. Being a rodent of just over 100 grams, not a lot of weight is placed on the legs during movement and fractures can heal with time and rest. Jericho’s leg did just that. By November, Jericho’s abscess showed no signs or re-occurring and she was using her leg well.

In December, her owners were set to return home to Australia; due to Australian export laws they were not allowed to bring Jericho with them. Dr. Sofronia, having grown rather attached to our little patient through all her medical issues, offered to give Jericho a home. Jericho now lives with Dr. Sofronia; she is reportedly the smartest hamster Dr. Sofronia has ever met. With her cage door left open, Jericho roams free in the evenings in the apartment, and in the mornings Dr. Sofronia finds Jericho back in her cage fast asleep. Jericho does her business in the cage, never on the floor in the apartment. She comes to work with Dr. Sofronia every 3 or 4 weeks to get her incisor teeth trimmed as they now have a tendency to overgrow due to a slight malocclusion as a result of her fall.   Dr. Sofronia is quoted in saying “I never thought I could love a tiny little hamster so much.” Jericho is indeed one special hamster with a life story to tell. Hopefully we don’t see anymore wild adventures from our little Jericho for a while. NEXT WEEK: We will interrupt this series of ‘Amherst’s 4-legged family’ to discuss prevention and symptoms of Gastric Dilatation Volvulus (Bloat) due to a request from one of our readers.