Dr. Yuen Introduces You To: The Emergency of all Emergencies 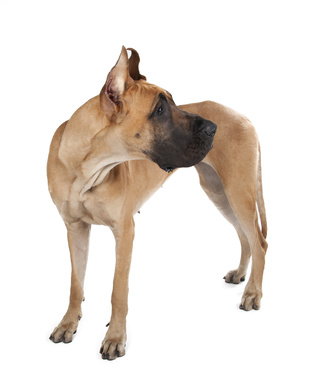 By reader request, this week I would like to talk about a syndrome that occurs in dogs called Gastric Dilatation and Volvulus (GDV). This condition is commonly referred to as Bloat. Unlike the more benign condition of food bloat, which I introduced a few weeks ago, GDV or Bloat, is a life threatening condition in which the stomach dilates and twists on itself.   When GDV occurs, it causes a decrease in blood being returned to the heart due to compression of large blood vessels (the vena cava and portal vein). As venous return decreases so does the ability of the heart to pump out blood to the vital organs. GDV is a true emergency and usually requires rapid and intensive care depending upon the initial presentation. Dogs experiencing GDV can present with an array of symptoms, but typically symptoms include: distended or bloated abdomen, unproductive retching/heaving, lethargy, excess salivation, heavy panting, restlessness or pacing, or pale gums. Treatment includes trying to decompress the stomach, intravenous fluids and medication to try to stabilize the patient, and surgery to de-rotate and pexy (adhere the stomach to the body wall) to prevent recurrence. Patients need to be cared for around the clock in hospital during the first 24 to 72 hours. Even with treatment, the mortality rate of a dog with GDV is documented to be between 20 to 45%. With such grim statistics, prevention of GDV is the best strategy to ensure a good outcome. Before we do that, let’s first look at the risk factors associated with developing GDV. Firstly, GDV is predominantly a problem seen in large and giant breed, deep chested dogs. One study that looked at the breeds of dogs brought into veterinary hospitals with GDV determined that the five most commonly affected breeds are the Great Dane, Weimaraner, Saint Bernard, Gordon Setter and Irish Setter. Although not listed in this particular study, German Shepherds, Doberman Pinschers, Rottweilers and Standard Poodles are often also listed as breeds at risk. For some insight into how common this condition is, one study determined that the overall lifetime chance of death from GDV in large and giant breeds was 6.7%, ranging from as low as 3.9% for Rottweilers and as high as 36.7% for Great Danes. A “bloated” stomach, notice the position of the Pylorus, now rotated.

That being said, there are also factors that are not breed specific, which are associated with increased risk of developing GDV. Some such factors are: -Having a deep chest -Feeding large amounts of food at once – Rapid ingestion of food -Feeding from an elevated position – Over 7 years of age -A fearful or anxious temperament -Stressful events -Having a first degree relative that has had GDV Of all the above risk factors, the one that seems to be the biggest predictor of GDV risk is having had a first degree relative with a history of GDV. Factors that do not seem to play a role as to whether your dog may develop GDV or not are gender as well as whether or not the individual is neutered.   Despite many theories about exercise, there is no hard data to support whether exercise, no exercise or how much exercise after eating affects risk. Looking at these risk factors, if you have a large or giant breed dog I would suggest you do the following things: 1. Divide your dog’s daily ration into two or three smaller meals throughout the day. 2. Feed your dog from a bowl that is on the ground and not elevated. 3. If you have a dog that tends to inhale its food, try implementing strategies to slow the eating down. For example, soak the food in warm water for a few minutes first so that is it mushy, or try putting a ball in the bowl so your dog has to work around the ball to get to the kibble. If you have a large, deep chested dog you may implement all the above suggestions, but if you own a Great Dane or there is a history of GDV in your dog’s ancestry, the risk of your dog developing GDV may still be too uncomfortably high for you. If that is the case there is an option of doing a prophylactic, elective gastropexy for your dog. At Amherst we do what is called an incisional gastropexy. This is done as an open abdomen surgery in which an incision is made through the muscle of the stomach wall and sutured to the abdominal wall to permanently adhere the stomach to the body wall. This is an elective procedure that can be done at anytime, but is often timed during your dog’s spay or neuter so he or she is undergoing just one anesthetic and recovery. A gastropexy is considered an effective tool to prevent GDV. It will not prevent future dilatations but it will prevent the stomach from twisting which is the life threatening aspect of the disease. Of course with any anesthetic and surgery there is some risk and recovery time associated with it. If you are concerned about GDV and your dog is a breed at risk, deciding whether to pursue an elective gastropexy for your dog is definitely a conversation you want to have with your veterinarian. Although GDV is a scary disease that many large and giant breed owners worry about, there are some preventative steps you can take to decrease your pet’s risk. I hope this blog has been informative as to things you can do at home as well as here at the hospital to ensure you and your pet never have to experience this medical emergency.       Below is a video of the surgery to prevent GDV, an incisional gastropexy *warning this is quite graphic