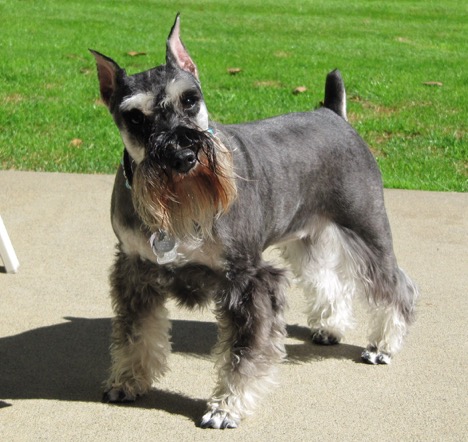 Bladder Stones: When to Pursue Surgery and When to Try Diet Therapy

Recently I saw an interesting case of a dog that was brought to our Vancouver veterinary hospital because she had urinated in the house.

Gigi is a 3 ½ year old, house trained, spayed, female Miniature Schnauzer.   With such a history and no other abnormalities seen on the physical exam, we checked a urine sample to rule out a bladder infection. Bladder infections are commonly seen in our pet dogs and cats. This condition can cause discomfort and a sense of urgency when urinating, which can lead to some dogs urinating in the house.

Some breeds are genetically predisposed to forming bladder stones, and Miniature Schnauzers are one such breed. Gigi’s bladder was x rayed and revealed that she in fact had multiple small to medium sized stones in her bladder. An x ray revealed Gigi in fact had bladder stones.

Stones in the bladder should not be ignored, they irritate the bladder wall causing discomfort and predisposing our pet to recurrent infections. As well, a bladder stone can become lodged in the narrower ureter when a pet urinates, causing a situation in which the pet cannot urinate and needs emergency veterinary care.

The most common bladder stones are made up of the minerals calcium oxalate, triple phosphate or a mixture of the two. Knowing which minerals the stone is composed of will determine whether they need to be removed surgically or can be dissolved through a special diet. The catch is that it’s impossible to know exactly what a stone’s composition is without actually being able to send the whole stone to a lab for analysis. We can, however, make an educated guess based on the breed and type of crystals that are seen in the urine.

Bladder stones that had to be surgically removed due to size and composition.

Triple phosphate stones can be dissolved through a special veterinary diet whereas calcium oxalate stones cannot. In Gigi’s case her urine showed triple phosphate crystals so we knew that at least the outside surface of the stones were made of this mineral. After discussing the risks and benefits of trying medical therapy or proceeding with surgery, the owners decided to try medical therapy first.

Gigi was given a course of antibiotics, determined by a culture and sensitivity, for the bacterial infection, and started on the veterinary diet. Two weeks into the treatment we checked a urine sample to ensure the infection was cleared. Four weeks later we repeated an x ray of the bladder so see if the size of the stones can decreased.

The x ray showed that all the stones had dissolved!  Gigi is a happy girl not knowing she got a reprieve from surgery. All she knows is that her lovely owners suddenly started feeding her a delicious canned food and her bladder feels a lot better.