Case of the Week: Not All Abdominal Masses are Bad 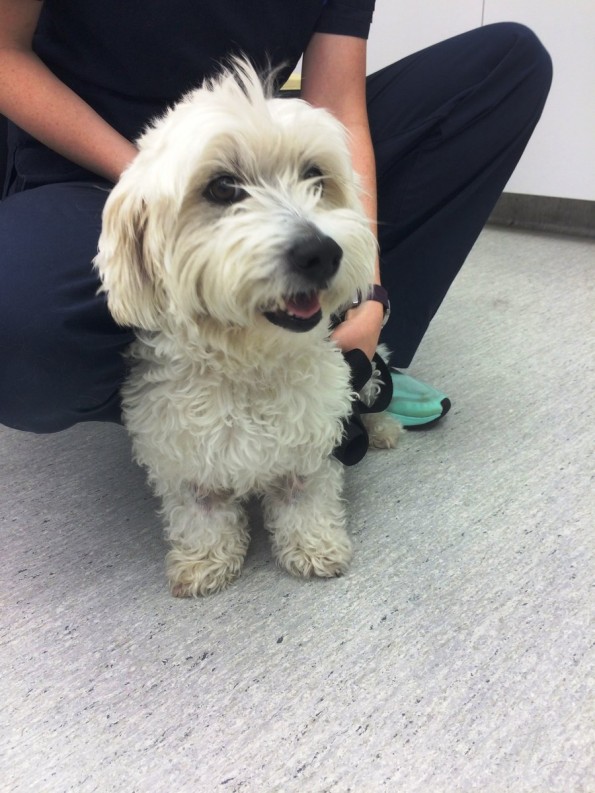 Callie is a sweet 9 year old, female spayed Bichon/Havanese cross. She came to our veterinary hospital because the owners had noticed over the last few months that her appetite had decreased but her abdomen was getting bigger. When we saw Callie her gums were very pale and her abdomen was firm and distended. Bloodwork and x-rays confirmed she was anemic and had a very large mass in her abdomen which occupied about 75% of the abdomen. To further evaluate the mass, an ultrasound was performed. Through the ultrasound we were able to determine that the mass was 16cm, blood-filled and growing from her spleen. Although Callie showed evidence of blood loss from her bloodwork, the ultrasound showed no sign of active bleeding. An x-ray showing a normal abdomen with no mass.

Callie’s abdomen with a large mass A normal abdomen with no mass.

Splenic masses are the most common canine abdominal mass seen in veterinary medicine. Splenic masses can be cancerous but up to 50% of splenic masses are benign. Benign masses can be hemangiomas, hematomas, fibromas or leiomyomas, which are all fancy medical names for different non cancerous masses that can be found on the spleen. The most common cancerous tumor of the spleen in dogs is a hemangiosarcoma. It is impossible to tell the difference between a malignant mass and a benign mass with the naked eye. The only way to determine this is to send the mass to a veterinary pathologist where the tissue and cells of the mass is examined under a microscope: which usually requires the entire spleen to be removed.

Splenic hemangiosarcomas are typically seen in older dogs with an average age of 9 years. Although it can happen in any dog, the breeds most predisposed to this cancer include German Shepherds, Golden Retrievers and Labrador Retrievers.   Hemangiosarcomas unfortunately metastasize/spread to the liver or heart relatively early in the disease so carry a poor prognosis for cure when it is diagnosed.

Surgery to remove the mass was the next step for Callie as she was clearly uncomfortable with the large mass in her abdomen. The mass could rupture and bleed at any time which could cause life threatening blood loss. All other diagnostic steps so far had indicated she was otherwise in good health; Callie was a good candidate to have this mass removed.

The mass was removed surgically by Dr. Beneke and me without complications. The mass weighed 2kg, over 20% of this 9kg dog’s weight! Callie had a smooth recovery and went home that night. The next morning she was eating more than she had in weeks – probably due to the fact that now her stomach had room again to expand from ingested food. The large splenic mass and spleen removed from Callie’s abdomen.

Callie’s mass was sent to a pathologist. Within a week we received the fantastic news that Callie’s mass was a benign hematoma, essentially a giant bruise/blood clot on the spleen. The surgery allowed us to confirm her diagnosis and it cured her at the same time.

Now,  two weeks later Callie is back to her normal, healthy self again!