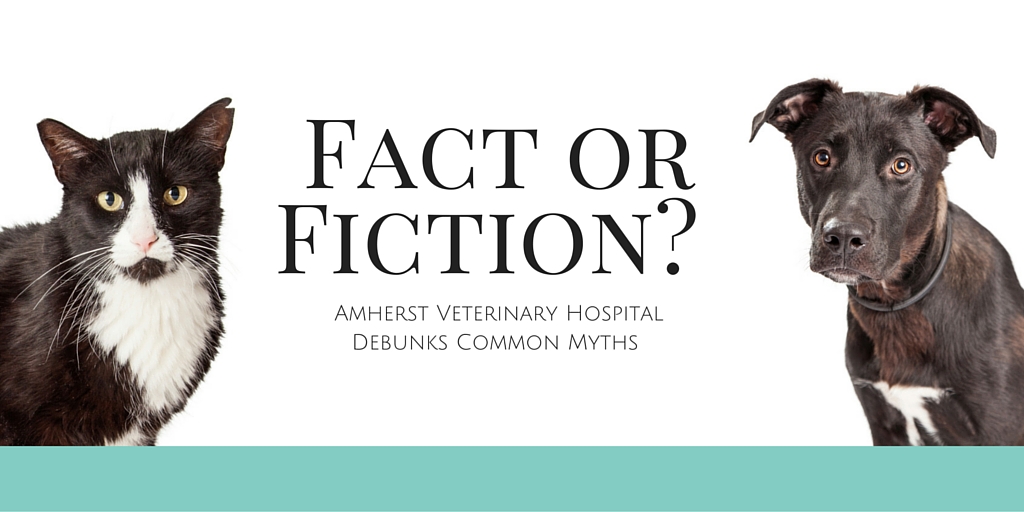 I often hear things that my clients have been told to do that cause me to raise an eyebrow. Often this information is from a breeder, other well meaning pet owners or Dr. Google. Some of the myths are benign to the pet, but others more harmful. Today I will discuss a few of the common myths I hear and shed my medical opinion about them.

Myth #1: Dogs do not need baths, washing them can strip them of the natural oils on their skin.

Frequent brushing sessions, combined with an occasional bath, keep your dog clean, comfortable and a more pleasant companion.How frequently you bathe your dog depends on how quickly he gets dirty and your tolerance for the dirt and smell.

For a dog that stays fairly clean, with regular brushing you may get away with fewer baths, say every 3 months. For dogs that do a lot of romping outdoors you may want to lather up more often, say once a month. Some dogs may only require a quick rinse off with the hose.There are subsets of dogs with skin issues that need frequent, sometimes weekly bathing with medicated shampoos, but do so only under the direction of a veterinarian.When bathing, always use a dog shampoo, rinse well and don’t over do it. Shampoos designed for people can dry or irritate your dog’s coat and too frequent baths may strip the coat of natural oils that protect the skin. But by all means, if your dog is dirty or has just found a dead fish to roll in, bathe him!

Myth #2: I should let my pet lick their wounds as that keeps it clean and helps with healing. That’s how animals in the wild clean their wounds.

Our pet’s mouth is full of bacteria, so when Fluffy licks a cut on her skin she is introducing the bacteria from her mouth into the wound. Excessive licking at the wound is like us picking our scabs; it will delay or prevent the wound from healing. Many times I see mild irritations or wounds on our pets that become infected, deep wounds because they have been allowed to lick at them excessively.

Myth #3: A pregnant woman should get rid of her cat

Congratulations on your pregnancy and please keep your cat!

As you can see the odds are slim that having a cat during pregnancy may lead to a pregnant woman transmitting toxoplasmosis to her fetus. If you are pregnant and worried about toxoplasmosis, the best way you can prevent this is by not feeding yourself or your cat rare or raw meat, wear gloves when gardening in case cats have been defecating in the garden and use this time as a perfect excuse to have your partner or someone else in the household be responsible for cleaning out the cat litter!

Myth #4: My breeder told me I should let my female dog go into heat at least once before spaying her.

This is a hot topic and one for debate; in regards to ovariohysterectomy and its association with mammary cancer, osteosarcoma and cranial cruciate ligament rupture research shows:

Mammary cancer (equivalent to breast cancer in women) occurs in dogs. Multiple studies have shown that early spay protects female dogs from developing mammary cancer later in life. The protective affects of prepubescent spaying in mammary cancers is universally accepted amongst veterinary oncologists. Dogs that are spayed prior to their first heat have a 0.05% risk of developing mammary cancer, 8% risk if allowed to have 1 heat cycle and 26% after the 2nd second heat compared to intact dogs (Schneider et al 1969).

In regards to osteosarcoma, an aggressive cancer of the bone, at least one large study (Hoffman et al 2013) showed the increased risk of osteosarcoma was 3-fold if an animal is neutered prior to 1 year of age. Keep in mind the 17 fold increase in risk of mammary cancer in unspayed females. This study also showed that overall life span, independent of cause of death, was longer in spayed pets.

For cranial cruciate ruptures, one study that has not been followed up found that dogs neutered prior to 6 months of age had a 3 –fold increase in developing this disease (Duerr, et al. 2007).

What do I recommend? If you have a small breed dog that is at minimal risk of developing osteosarcoma or rupturing his cruciate ligament, spay her after 6 months but BEFORE her first heat (typically between 6 to 9 months).

Large or giant breed dogs such as Rottweilers, Mastiffs, Great Danes and Retrievers are at increased risk for developing osteosarcoma and cranial cruciate rupture regardless of age of neutering. For these breeds you may consider letting your female dog go through ONE heat prior to spaying. Any other reason to hold off such as she’ll be a ‘better or nicer pet’, she’ll be ‘overall healthier’ are just groundless claims that don’t really have a place in the spay debate.

With so much information readily available to us today, it can be hard to decipher fact from myth when it comes to caring for our furry friends. If you are ever unsure about your pet’s health, we always welcome open discussion and would love to share our knowledge with you.