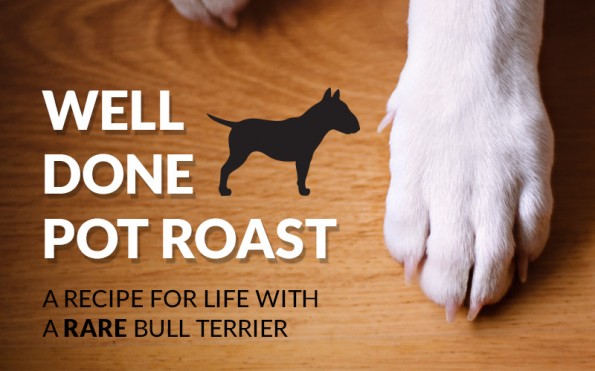 After consulting some locals for a hiking opportunity for Roast and I during a trip to Kamloops, I found a gravel trail that led to the top of a mountain. “It’s real gentle,” a kind lady assured me. I arrived and wondered what her definition of gentle was. The hill slanted upwards in what seemed a 45-degree incline, and I have a knee injury and lets be honest…a really lazy dog. But I strapped on my leg brace and hooked on the leash, encouraging Roast up the hill.

As testament to his pampered nature, Pot Roast is not a fan of chunky gravel and he was lumbering along painfully slowly. It was an off-leash trail so I unhooked him, allowing him to scamper through the brush instead. After a short time, the incline was getting the better of my knee so I turned around but quickly noticed Roast wasn’t following. Never one to let me out of his sight, I knew something was wrong. I found him lying on the side of the trail, unmoving. Closer inspection revealed a rather nasty encounter with a cactus. It had stuck to the back of his leg and into his thigh, so he couldn’t move without piercing himself further. I tried to pry it loose but it cut my hand so eventually I did what any dog mother would do—I took off my shirt and wrapped it around the plant and managed to pull it free. But between the blood and the spikes, I couldn’t manage to extract my shirt from the mess, so I went topless. Roast also had spines still stuck in his leg, so he wouldn’t walk. Like those mothers who lift cars off their children in car wrecks, I wrapped my eighty-pound dog around my neck like a fur stole and carried him down the trail, leaving a sweaty and bloody trail back to the car. I met two couples along with way. They looked at me like I had three heads.

Once back in the hotel, I soaked Pot Roast in the tub for thirty minutes before setting to work removing the spines with tweezers. The last one removed, he jumped from the bed, did a wild bully run and scampered to his food bowl to bark for dinner, all as if nothing had happened.

My knee swelled to the size of a basketball and I could hardly walk for a week. Oh, the things we’ll do for our fur kids!