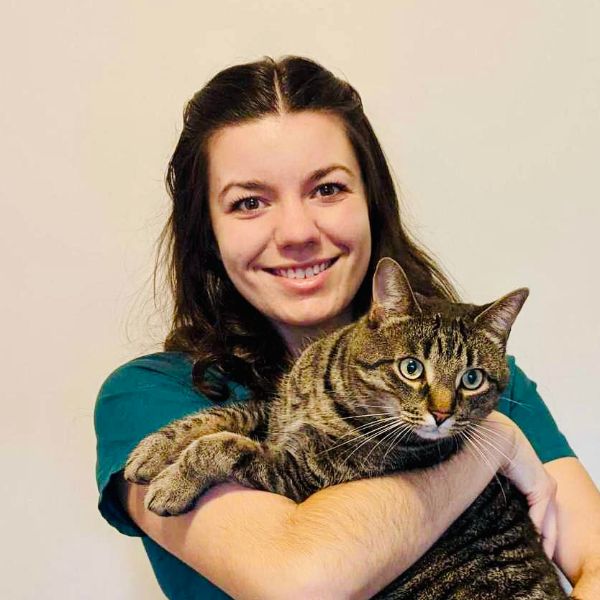 There hasn’t been a day in Shania’s life that she hasn’t had a furry family member. Midnight (a black lab that lived until 19 years of age!) was part of the family before she was and growing up she followed Midnight’s adventures and where she slept, Shania slept… Even if that meant sleeping under the very messy bed as a kid.

Shania was born in Sidney on Vancouver Island. She has lived in Ontario and Vancouver and loves living by the ocean.

Growing up Shania’s family always had lots of rescues around and it has been a very rewarding lifestyle…such a pleasure to see them go from being so frightened to cuddling up to you on the couch. Back then, Shania thought she was a dog person, but now that she is a very happy cat mom of Gypsy and Dash, she realizes that she is just an ‘animal’ person.

Before joining Amherst, Shania worked for 2 years at another clinic as a veterinary assistant, which she loved and which is what drew her to Amherst.

When Shania was younger, people would comment to her that they thought she would end up working at an animal hospital. She thought that was crazy at the time, thinking that she could never work where she would see an animal in pain. As she grew older she realized she could help them by trying to keep them calm and help make their trip to the vet as enjoyable as possible, whether that’s from giving a treat or a good ear scratch. At Amherst she gets to accomplish this regularly.

Right now, Shania’s hobbies include being a very busy working person and going to acting school.